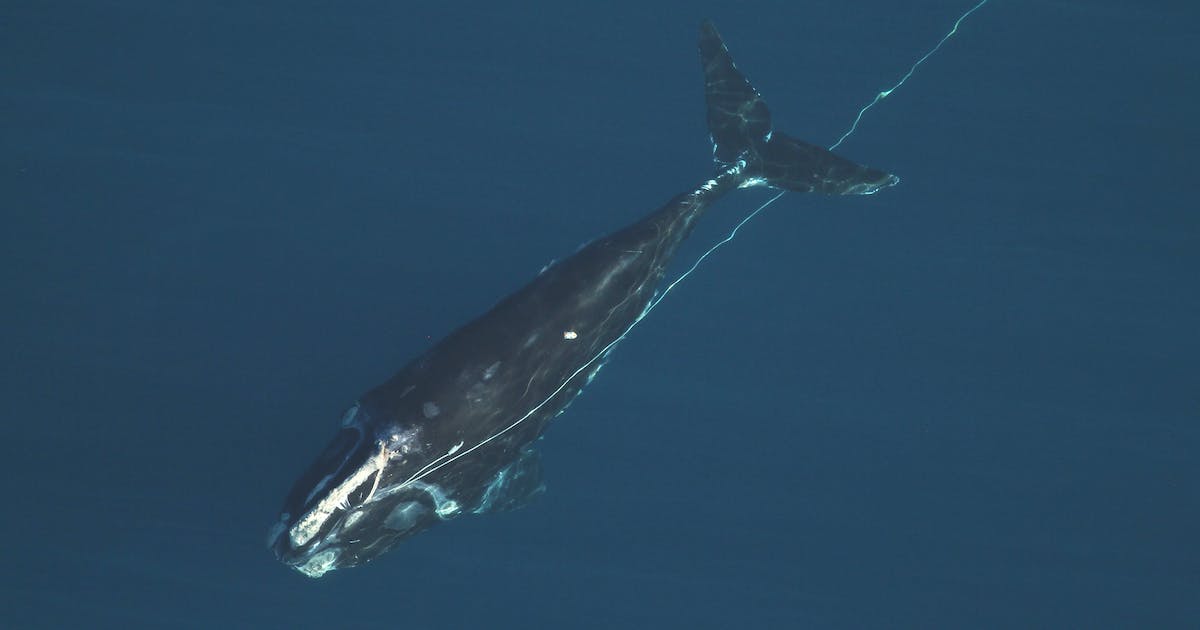 Editor’s note: News about conservation and the environment is made every day, but some of it can fly under the radar. In a recurring feature, Conservation News shares a recent news story that you should know about.

Each year, this rare species migrates along the eastern coast of the United States. The path leads right whales into a gauntlet of treacherous fishing grounds around New England, where they face entanglement in commercial fishing gear, often used to catch lobster. In response to the ongoing threat, the grocery store Whole Foods recently announced that it will temporarily stop buying Maine lobster for its stores nationwide, Rachel Treisman reported for NPR.

Whole Foods made its decision after two separate seafood-monitoring groups downgraded the sustainability rating of Maine lobster, citing the potential impact on the critically endangered whales. The threat of entanglement — along with collisions from boats and ships — has taken a severe toll on right whales, which were nearly hunted to extinction by 19th-century whalers. As few as 350 individuals remain in the world and more than 85 percent of those have been caught in fishing gear at least once, according to estimates from the National Oceanic and Atmospheric Administration (NOAA).

While many environmental advocacy groups have cheered Whole Foods’ decision, the pronouncement was met with disappointment by Maine’s fishing industry and politicians. Maine’s lobster fishery employs more than 5,600 independent lobstermen and contributes more than a billion dollars to the state’s economy every year, Treisman writes. Even with regulations put in place by NOAA to protect right whales, fishermen in the state continue to harvest over 100 million pounds of lobster annually.

The plight of the right whale is a reminder of the inherent challenge in balancing production and protection in the world’s most vital marine ecosystems. But as marine wildlife continue to struggle, and the demand for seafood surges, consumers are often left to make hard choices at the grocery store. After all, the Maine lobster ban at Whole Foods is only temporary for now, and company officials expect that the product will still be available on their shelves for some time.

Most seafood available in stores comes from either a fishing business or an aquaculture operation. Experts say purchasing decisions can have unseen, but important, implications for the health of the ocean, the livelihoods of fishers and the survival of marine wildlife like right whales.

Further reading: What on Earth is ‘aquaculture’?

In Colombia and Costa Rica, Conservation International’s EcoGourmet program is helping to build a supply chain for sustainably caught fish. It trains artisanal fishers on best practices — like catching fish of a certain size and avoiding restricted areas. At the same time, it connects those fishers to regional and national markets where they receive higher pay for fresh, sustainably caught fish. The program boosts fishers’ incomes and empowers consumers with information about how their seafood is sourced.

EcoGourmet aims to build relationships between local fishers, restaurants and consumers. Without them, deciphering what is sustainable can be a challenge.

“Seafood packaging usually offers little information — so, it’s hard for most customers to know what is right,” said Jack Kittinger, an expert in sustainable fisheries at Conservation International. “What’s the right thing to purchase? What is sustainable and what is not? Who am I supporting with my purchase?”

Kittinger’s advice? Purchase as close to the source as you can — meaning fish and seafood from local fishers. Simply asking about the source of the product at a restaurant or at the seafood counter is a step in the right direction.

“Start that conversation at your local restaurants and retailers,” he said. “That will make all the difference, because each of us has the ultimate say in this issue.”

For Conservation International’s tips on eating sustainably, follow this link.

Will McCarry is the staff writer at Conservation International. Want to read more stories like this? Sign up for email updates. Also, please consider supporting our critical work.

Some populations of large ocean fish are recovering, but not sharks